I generally like my beer on the darker side of the spectrum. West Coast style red ales are my all-time favorite. I also like a hoppy brown ale or a roasty porter.

Kauai Island Brewery & Grill, the world’s westernmost brewery, serves a spectrum of beer, from light to dark. I sampled 6 of the 10 house beers. 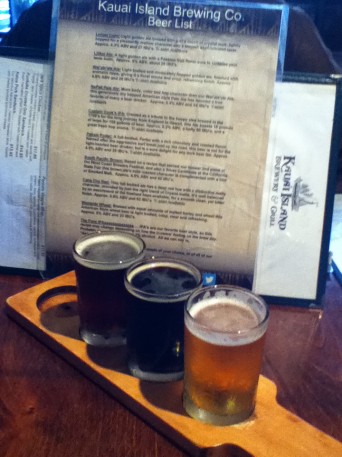 The pub-fare menu includes pupus, soups, salads, sandwiches, burgers, fresh fish and entrees. We sampled the daily special of 3 Ahi Tacos & Fries for $14.95. We also tried the Parmesan Crusted Calamari Strips for $10.95, which included a half-pound of panko-breaded calamari, lightly seasoned, and served with a furikake ranch sauce (tastes like a blend of ranch dressing and wasabi). Light, crispy, delicious!

The facility has high ceilings for an airy feel, and a wooden bar, tables and chairs for a more earthy feel. In addition to house and guest beers, the  full bar serves wine, mixed drinks and cocktails. There are 5 flat screen HDTVs to watch games. The brewpub also has an array of logo t-shirts on the wall; I took home a longsleeve navy blue shirt.

As the westernmost brewery, it’s the “last beer before tomorrow.” No matter which way you’re headed, this brewpub is definitely worth a stop!

Note: Kauai Chocolate Company is across the street at 4341 Waialo Rd. The Peanut Butter Brick is so big and rich, it can take a couple days to eat.