DARK SURF, the first book in the DARK SURF Series

SHARK! Few words have such heart-stopping power—particularly among surfers.

When 23-year-old Jake Ryder sees his best friend, Cody, wash up on the beach after being killed by a great white shark, he can’t let it go. Jake’s quest to find the last surfer to see Cody alive leads him to the Nomads, a shadowy tribe that prefers to hit the waves only after the sun sets. Led by Tristan Pierce, the first of a new breed of vampires, the Nomads are at the center of a growing number of dead and missing surfers. Also on the bloody trail is Lani Marley, an undercover FBI agent who befriends Jake to infiltrate the Nomads but soon falls for Tristan…

DARK SURF is a gripping and unforgettable novel about friendship, betrayal, revenge, and the lethal power of love.

BUY the PAPERBACK or eBOOK

RISING, the second book in the DARK SURF Series 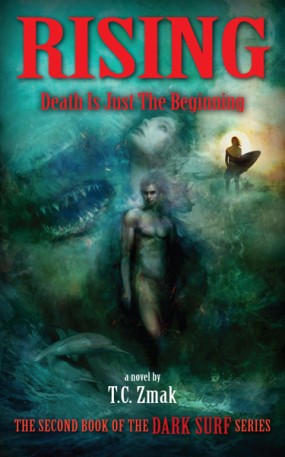 Surfers are dying.
Graysuits are disappearing.
A new threat is rising.

In DARK SURF, rival surf clans went to war, leaving a wake of blood along the West Coast. Now, in the aftermath of the Rogues’ devastating attack on the Nomads, the chase is on from California to Hawaii. Will Jake and Leilani catch Dean before he rebuilds his ranks and kills again? Will Skylar’s new romance be ripped apart by secrets and lies? Is Tristan gone forever? What terrifying predators lurk beneath the waves, ready to strike?

As archenemies battle, the body count climbs and new alliances are forged. But no one can escape the vicious circle of revenge—or the rise of a new enemy that threatens to destroy them all.

BUY the PAPERBACK or eBOOK

To invite T.C. to join your book club discussion about the DARK SURF series, send an email request to [email address].

Spoiler alert! To provide reading groups with the best questions possible, it’s necessary to reveal important parts of the plot. If you haven’t yet finished reading the DARK SURF novel, we suggest you finish before reviewing these questions.